About Us
Previous
Next 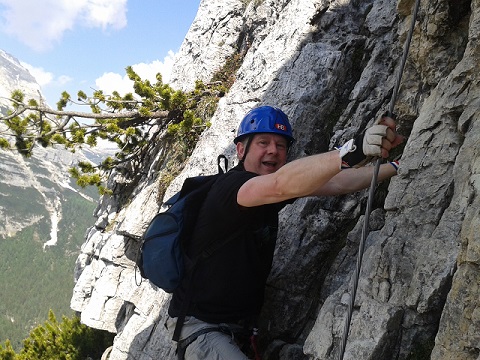 Via Ferrata climbing in Italy
Chris graduated from Guy's Hospital and throughout his career has worked in various hospitals to gain experience. He established a private practice in the West Midlands in 1994 where he worked until 2001 when as a family they moved to Scotland.

Initially he worked as Physiotherapy Manager in a private hospital, but realised that opening another practice was the right thing to do and so Physio To Go (Scotland) was opened in 2004.
The clinic expanded and in 2010 moved to new premises to provide more space and better access. It was at this point the clinic was renamed The Physio Stop.

Chris has worked extensively with athletes at all levels, including elite athletes and he has traveled widely with UK Athletics and Team GB to cover events such as European Championships, Grand Prix events and the Manchester Commonwealth Games.
He currently works with Scottish Athletics teams at indoor and outdoor events.

Outside work, Chris is an avid climber and has enjoyed many major climbs with his son ; Ben Nevis, Aonach Eagach and the Cuillin Ridge to name but a few. He also enjoys curling, motorcycling and amateur dramatics
Next
Previous